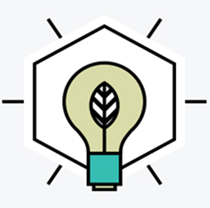 Active Chilled Beam (ACB) systems were first introduced as an alternative to radiant cooling systems that allowed for greater cooling capacities and lower capital costs.  The two systems have many design philosophies in common, including humidity control strategies.

Early ACB applications, and the majority of recent ones, have utilized the same basic approach to humidity control as radiant systems.  All latent cooling (space and ventilation) is done centrally at one or several air handling units.  These AHUs are sized such that they have sufficient latent capacity to keep all zones they serve at or below a design absolute humidity level at all times.  Dehumidification is 100% handled by the primary air delivered to the chilled beams, and the chilled water coils in the ACB units are used to do sensible cooling (temperature control) only.

As in radiant cooling systems, the chilled water delivered to the ACB units is maintained at a temperature slightly above the dew point temperature of the spaces they are in, which typically works out to be 56 - 58°F.  This ensures that condensation never forms on the coils of the ACB units. Due to the insulating of the air film on the coil fins the apparent dew point is 2-3F lower, thus 52 – 53F in a typical zone.

Recently, some ACB systems have been designed with a very different approach to humidity management.  Rather than keeping coils dry, these systems are designed to do latent cooling with the ACB unit cooling coils.  With this strategy, the ACB system has much more in common with a fan coil unit (FCU) system than a radiant cooling system.  This design approach (Condensing ACB systems) has some advantages to traditional non-condensing ACB systems, but also has a number of drawbacks.

As the name suggests, condensing chilled beams accumulate moisture during their normal operating conditions. As a result, these systems and the beams themselves must be designed with condensate removal in mind. The units require vertical coils and drain pans, and the systems need drainage lines and potentially condensate pumps.   Condensate lines & pumps increase first costs, and the type of ACBs do as well.  ACB models suitable for condensing operation are usually much more expensive than basic ACB models without drain pans.  These costs are typically offset by other savings.   Condensing designs only require one chilled water temperature, so there is no need for a heat exchanger, dedicated chiller, or mixing valve & associated controls.  AHUs can be less expensive because they do not need to do nearly as much dehumidification, and they may require less airflow in sensible load driven applications.  The number & size of ACB units can be reduced since lower water temperatures allows the beams to have more cooling capacity, but this is often not the case because the beams have to do a lot of extra (latent) cooling that is done at the AHU in non-condensing systems.  This allows the AHU to be sized for only the outdoor air requirement needed, in certain cases.

Non-condensing ACBs are a very low maintenance, long lifecycle system.  When run dry, ACB coils need only to be vacuumed occasionally, the frequency depending on the building.  In low-lint environments such as most offices, it is common to require cleaning only once every several years.  In spaces such as hospital patient rooms, vacuuming may be required every several months due to lint accumulation that can occur.   No filters are required, and more intensive coil cleaning is never needed.    In condensing ACB systems, significantly more maintenance is required.  Condensation on the coils causes dust and dirt to get stuck to them, so a lot of the debris cannot just be vacuumed or dusted off.   Most of this can be avoided by using a filter on the coils. Dust and other particles will be captured before depositing on the fins, which cuts down on required coil cleaning but is a significant maintenance cost in itself, since typical projects contain hundreds of ACB units which will each need at least one filter replaced every few months.  Coils are not the only maintenance issue, the drain pans and drainage lines will need to be periodically checked for blockage and cleaned. If condensate pumps are used, they too will need to be maintained.  Lower water temperatures also mean that more chilled water pipe insulation is required, and there is a much greater chance of having insulation get wet from condensation and failing over time.  There is also the issue of moisture or standing water in the drain pans and lines that can lead to mold and other health concerns.

Filters also impose a significant penalty to induction rates and therefore cooling capacity of the beams.  Brand new filters cause large performance decreases, and that only increases as filters get dirty.  There is also a loss of efficiency due to water droplets collecting on the coil and blocking much of the free area needed for airflow, between both of these effects, much of the increased capacity gained from lower temperature water is lost.

Use of lower temperature water also means that condensing ACB systems will have much fewer water-side economizer hours in most climates, and they cannot take advantage of the higher chiller efficiencies that come with generating higher chilled water temperatures.  Other green technologies can be used in conjunction with these higher temperatures including high efficient cooling towers, geothermal loops, district CHW loop and energy saving heat pumps. 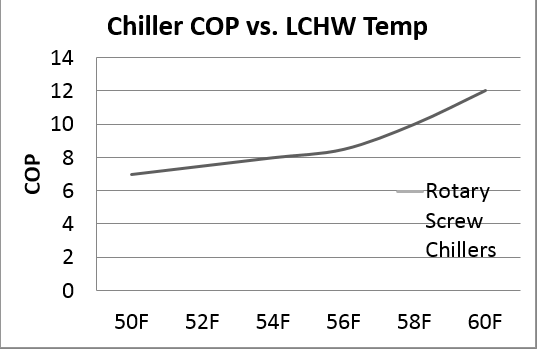 Yang, Li; Braun, James E.; and Groll, Eckhard A/, "Te Impact of Fouling on the Performance of Filter-Evaporator Combinations"